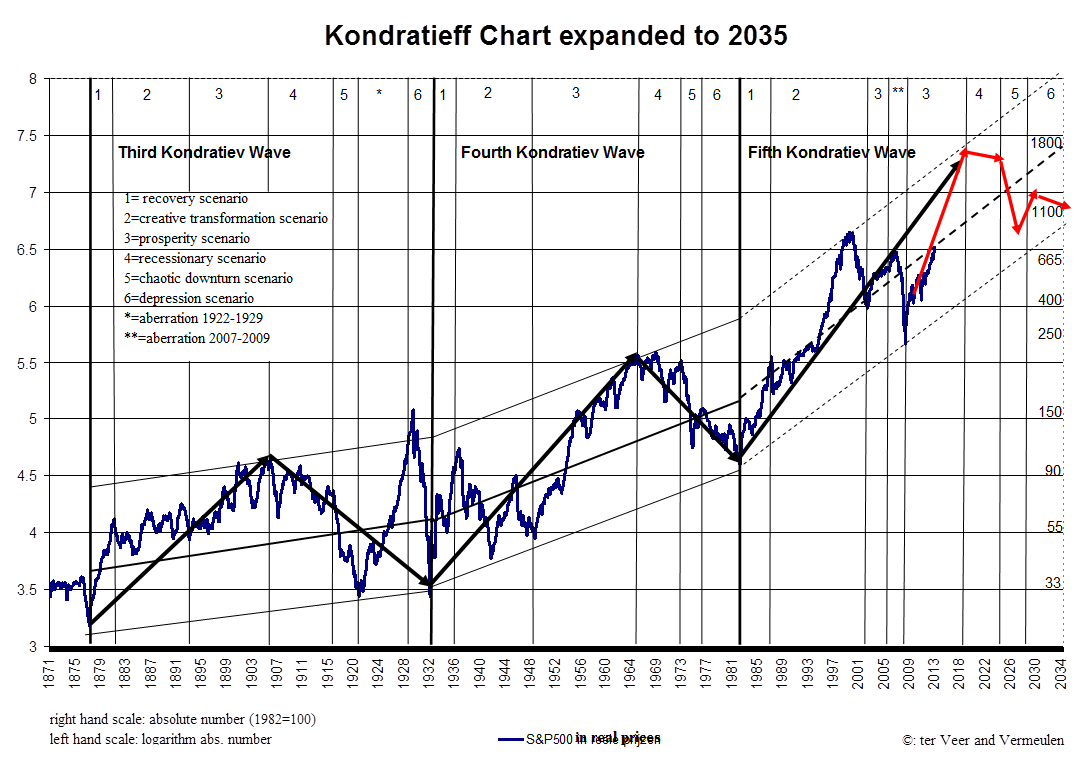 Posted by investing on the waves at 19:28 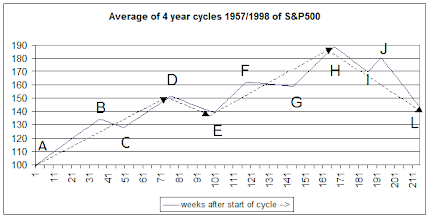 This blog will discuss from time to time the most important cycles, as we (ter Veer and Vermeulen) decribed in our book.

We illustrate the long wave, the Kondratiev wave, with the chart above the blog. So we see inaverage good times for investors until 2018 (maybe longer).

From time to time I will try to indicate where we are on the four year cycle. You can't know for sure, so the indication will always be subjective and can be wrong.

At the moment I think we probably are in the phase FG (and we have seen the first correction in this phase).

Dreamings and the spirit of the age

In our book and on this blog I will enter some curious pieces of information with the intention to explain something about the spirit of the age.

We call these stories dreamings, just like the Aboriginals do when they try to explain something difficult with a simple story. 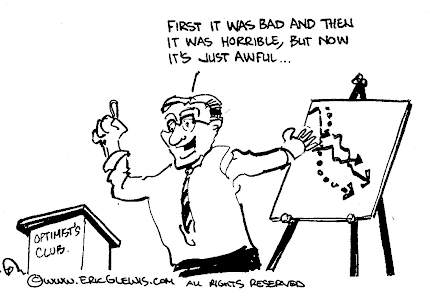 investing on the waves
This is the sister blog of the Dutch blog Beleggen op de golven. I'm strategist of the English asset manager F&C and located in the Netherlands. F&C has about € 120 billion under management. 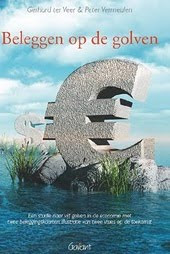 This blog started because of the Dutch book Investing on the Waves (Beleggen op de golven in Dutch).

The summary of the book:

For being a good investor you must have views. You have to explain things well to judge what the future will bring.

We (Ter Veer and Vermeulen) think the next eight to ten years will bring prosperity as the world (dominated by the 85% of the world population that lives in Emerging Markets) has never seen.

We base that view on the study of several shorter and longer cycles in the economy. We use our investment chart (heading this blog) already for several decades: you can see the Kondratiev wave with its regular sequence of the scenarios recovery, creative transformation, prosperity, recession, chaotic downturn and depression.

In the current phase of the cycle business and indivuals are strong (and government plus employees weak). The strong powers cause a high growth of productivity and implementation of many innovations.

High productivity growth is much more important for economic growth than debts deleveraging.

That is why we -especially Emerging Markets- will get strong growth in the world. That will especially be the case when governments invest a lot in infrastructure (including what is necessary for the Green Revolution).

The growth in the world in the past years had three pillars: the ICT-Revolution, the Emerging Markets and the Financial Revolution with its Asset Economy.

All three pillars had its severe setbacks (The ICT-Revolution in 2000-2003, the Emerging Markets in the Asia crisis of 1997-1998 and the Financial Revolution in 2008-2009 because of the Credit crisis). The first two pillars saw very strong recoveries and we expect the same for the third pillar, especially when the Green Revolution will take off..

Gerhard ter Veer was CIO of PVF asset management that later merged with Achmea Asset Management and F&C. After his retirement he wanted together with Peter Vermeulen, then his head of strategy and now strategist at F&C extensively our theories about investing and our views that we had told to the boards of pension funds during decades.

To make things not too heavy and complicated we explain a lot with dreamings, the simple stories that aboriginals use to teach. On this blog you will see more new dreamings.

Explanation for the existence of a long wave (Kondratiev wave)

*Sociological mechanism: you have long periods where the society gets softer and harder.

All three mechanisms explain for a part the phenomenon of long waves. When you take them together, you can get a better picture.

The power shift between Business, Employees, Government and Individuals ( a social mechanism) is according to us the best explanation for long waves.. It explains why in some periods the incentives are right to have succesful innovations,inflation and high investment growth versus other periods in which inflation goes up,unemployment goes up and profit margins go down.

The current debt crisis is definitely a reason why growth is so low in high debt countries.

The possibilities for high growth are underestimated because productivity growth is high, many innovations have to be implemented and important new (emerging) markets grow fast.

In Emerging Markets and some developed markets like Germany you have the old classic situation of the powers for a prosperity scenario: strong Business (strong profit growth, high margins), strong position of employees (unemplyment rate is low or falling to low levels) and a weak position of government (has to downsize). Individualism is not yet strong.
In many dveloped markets like the US and the UK the situation of the important powers is differenT: employees are in a weak position and individuals (like knowledge workers with (international) networks) are in a strong position.

Because of the weak position of employees this is not the classic prosperity scenario, but you still can get high economic growth when the income of business and individuals grows strongly: a Goldilocks economy with a strong asset Economy. When this growth is strong enough this will lead to a more normal prosperity scenario with fast declining unemployment rates.

This situation will occur much sooner than most people realise: productivity growth is high, the housing market in the US will grow strongly from rock bottom levels, investment growth will be very high because of high profit margins and low real interest rates.